I was a TV kid, back in the days before we really knew that watching TV wasn’t great for kids, when there were only 3 or 4 channels (and one was always really snowy?) and you had to get up and walk over to the TV to change the channel. I spent many hours with the crew from the Electric Company, Sesame Street (which always confused me- didn’t those people realize they were hanging out with puppets?), Superfriends and Tom and Jerry. It should come as no surprise then to discover that my kids watch TV. Not the hours that I did, but they watch. Typically I watch with them because TV is part of our “wind down from whatever insanity we’ve been engaged in all day” routine and I need to wind down just as much as they do. Plus kid’s TV is so much cooler than I remember!

So last night, as we were watching a bit of Fetch! With Ruff Ruffman!, I realized that the kids on this show were living the Critical Skills Classroom right on TV! They were solving problems like “how do we neutralize the smell of skunk spray?” (Thanks to ANE’s Luanne Johnson and her Coastal Skunk Ecology Research Project!) or “How do laws get made?” or even “How can Ruff decrease his energy usage?” They engaged with experts, used a variety of resources (usually limited) and did some serious creative problem solving. Heck, the problems they solve are even called challenges!

Then I got to thinking about it, and I realized that the same was true for Phineas and Ferb, (who seem to come up with some amazing thing to do every single day of summer vacation), The Wonder Pets (who work together to save animals from a variety of threats- and learn about teamwork and habits all at the same time) , Sid the Science Kid, (who’s all about the scientific problem solving) Cyberchase (math, math, math!) and Word Girl (who’s from the planet Lexicon and solves crimes while also improving vocabulary). Apparently, kid’s media has discovered what we’ve known for years- kids love to solve problems. The more real the problem, the better. Each of these shows models the same skills and dispositions that we teach, in a context that simultaneously teaches reading, science, history and/or math. In my experience, if you ask a preschooler “What’s gonna work?” and his or her answer is “TEAM-work,” then you have the Wonder Pets to thank. When I introduce my daughter to a new word and she responds, “Word up!” I know that her newly emerging love for language is partially due to the ever-cool Word Girl. 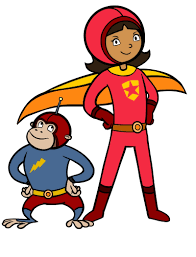 And dear old Ruff Ruffman has brought my kids into creative problem solving in ways that I would have been hard pressed to do alone. (Not to mention that two recent studies from Annenberg and the University of Florida show that kids who watched the PBS Kids program Super Why showed Improved overall performance, high levels of engagement, growth on targeted literacy skills, and improved pre-reading skills. Additionally, “low-income and working class children showed substantial improvement on tests measuring phonological, phonemic, and symbolic awareness.” But that’s sort of beside the point.)

Now I’m not proposing that we turn our kids over to the Boob Tube all day long. We have a strict 30 minute per day screen time rule in our house. I just find it fascinating that while we Critical Skills Teachers may find ourselves swimming against the political tides in our own schools and classrooms in this era of Test is Best, at least some of the pop culture world adopted our values while we weren’t looking. The questions now becomes- how far can we ride this wave of kid interest and research to bring our schools, colleagues and classrooms in the Critical Skills world?

This entry was posted in Uncategorized. Bookmark the permalink.